Will Putin and Trump Bond Over Oil? There’s room for cooperation, but also competition. In the early 2000s, the Russian and U.S. presidents, Vladimir Putin and George W. Bush, decided it was time their two countries had a closer relationship. The obvious place to start was the oil industry. The U.S. was importing almost twice as much crude as it produced and wanted to diversify away from Middle Eastern suppliers. Russia’s vast, untapped reserves of oil needed two things U.S. companies had plenty of: money and technology.

In October 2002 the inaugural U.S.-Russia Commercial Energy Summit convened in Houston. Over two days, members of both governments and executives from 70 oil and gas companies mingled and talked business. Eleven months later, a second summit was held in St. Petersburg, where the focus was on improving the climate for energy investment in Russia. A closer relationship seemed to be developing, but there would be no third summit. 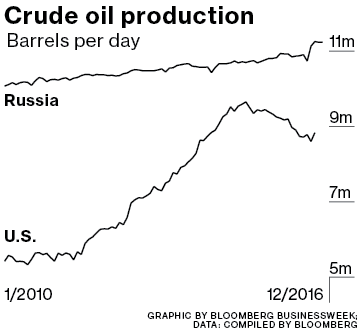 By 2004 the Kremlin had begun nationalizing portions of Russia’s private energy sector, most notably seizing the assets of Yukos, the largest oil company. At home, U.S. drilling companies were developing fracking technology to unlock oil and gas from shale formations, and they were reluctant to share their knowledge with the Russians. “The U.S. became quite cautious, and so the basis for establishing this harmonized relationship was destabilized,” says Igor Yusufov, Russia’s energy minister from 2001 to 2004 and a key participant in the energy summits.

Yusufov, who now runs an energy investment fund, is hoping that incoming U.S. President Donald Trump will restart the high-level meetings. Trump has vowed to improve relations with Russia and has tapped former ExxonMobil Chief Executive Officer Rex Tillerson to serve as secretary of state. Tillerson arguably has more Russia experience than any other U.S. executive, having negotiated a $500 billion joint venture with Kremlin-controlled Rosneft in 2011.

The potential for a new era of constructive relations between the U.S. and Russia will likely be a topic of discussion in the hallways of Davos, where the attendee list reads like a who’s who of the oil industry. A lot has changed since Yusufov was clinking glasses with then-Energy Secretary Spencer Abraham. The U.S. is poised to become a net energy exporter in the next decade, according to the U.S. Energy Information Administration. In time, American oil and gas could compete with Russian supplies, exerting pressure on global prices. Cheap energy isn’t exactly good for the Kremlin, which has been starved of revenue since the crash in oil prices.

A first step in any rapprochement would be to lift the sanctions that the Obama administration put in place in retaliation for Russia’s incursions into Crimea and Ukraine. “If he wants a better relationship with Russia, Trump can start by dropping the sanctions,” says Steven Pifer, who served as deputy assistant secretary of state in the Bureau of European and Eurasian Affairs with responsibilities for Russia and Ukraine from 2001 to 2004. The question is what does the U.S. get in return. “If you take the sanctions off, you have no leverage,” Pifer says. Speaking at his Jan. 11 confirmation hearing, Tillerson called sanctions a “powerful tool” but said that poorly designed sanctions can be worse than having none at all.

Carlos Pascual, who led the Department of State’s Bureau of Energy Resources from 2011 to 2014, says any reevaluation of the relationship with Russia will have to include the issue of cyber attacks, the situation in Syria, and Russia’s role in the Mideast. There’s also the question of whether a Tillerson-led State Department would work in concert with U.S. companies trying to exploit opportunities in Russia. Richard Morningstar says that when he was U.S. ambassador to the Republic of Azerbaijan from 2012 to 2014, “the State Department people and the Exxon people were like two ships passing in the night,” even though both camps were deepening their engagement on energy issues in Russia and the surrounding area.

Morningstar, who now runs the Global Energy Center at the Atlantic Council in Washington, wonders if a Trump administration will prioritize closer ties with Russia over geopolitical issues. “Will he care what role Russia plays as a primary supplier of gas to Europe?” he asks. “There is also the question of how a potential reset with Russia flies in the face of a desire in the U.S. to sell more to Europe.”

Yusufov brushes aside talk of competition and instead emphasizes how the two countries could cooperate to stabilize a volatile oil market. “We could combine our efforts to establish prices that would be of benefit to both countries,” he says. A range of $60 to $80 a barrel would be high enough for the Kremlin to plug its budget hole and for U.S. frackers to start investing in new projects-though not so high that drivers in the U.S. would feel too much pain. “This could be the essence of the discussion of a Russian-American energy summit as it was 15 years ago,” Yusufov says.