Visit any construction site in Calgary and you’re likely to find some British and Irish workers, says Adrian Bourne, the boss of a company that supplies electricians in the Canadian city. Source: BBC

Out of the 200 people that Mr Bourne has on his books, 70 are from the UK and Republic of Ireland.

Mr Bourne, who is originally from Manchester, England, says he could do with dozens more from across the Atlantic.

“If we put an ad in a [local Canadian] paper, we may get one response,” says the president of Unitech Electrical Contracting.

“[As a result], instead of bidding on three projects, we bid on one,” says Mr Bourne, whose men are all busy working on the Calgary airport expansion, new office towers, schools, hospitals and retirement homes.

“The number one question we get when closing a tender is, ‘Have you got enough labour?'” he adds.

“Canada’s a great country and such a rich part of the world. There’s so much work here, it’s unbelievable”

As Alberta’s economy continues to boom, led by its extensive oil industry, an estimated 114,000 additional trades positions need to be filled by firms of all sizes across the province by 2021.

That projection comes from Calgary Economic Development (CED), a government agency dedicated to supporting the economy in the wider Calgary area.

With too few Canadians to fill all the extra jobs, CED is now, twice a year, leading delegations of Alberta companies on trans-Atlantic recruitment hunts.

“We were all quite shocked with the turnout,” she says. “Over the course of three events, there were 14,000 people who attended. When the door opened the first day, there was a line-up around the field.

Ms Sutherland describes the UK and Republic of Ireland as “a ripe recruiting ground” for Canadian companies. She highlights the shared English language, similar cultures, and the abundance of not just qualified, but experienced tradespeople in the British Isles.

With a jobless rate of just 4.4% in Canada, compared with 7.6% in the UK and 13.3% in the Republic of Ireland, Ms Sutherland describes the situation as “win-win right now”.

“We have demand, they have supply,” she says.

Industrial electrician Mark Grieve and his wife made the leap from Kirkcaldy, Fife, to Calgary after attending a similar jobs fair in Scotland in February 2012.

“We’d never been to Canada, but we’d seen pictures of the Rockies, and it looked great, so we said, ‘Let’s go,'” says the 40-year-old father-of-two.

“We sold our house in Scotland, and our car, came across and bought a house within four months,” says Mr Grieve, who works for Tarpon Energy Services, a company that builds electrical control systems for Canada’s oil firms.

Tarpon, which hired 531 tradespeople last year alone, has 65 temporary workers from the UK and Ireland, working with 1,100 Canadians.

Mr Grieve, who arrived on a one-year work permit, is now working towards permanent residency under Canada’s Federal Skilled Trades Programme. This was launched by the federal government in January this year to speed up the immigration process for in-demand tradespeople.

However, the employment of foreign workers has not been without controversy.

Earlier this year, a company in British Columbia, HD Mining, set off a firestorm by hiring 200 temporary workers from China, claiming that no Canadians could do the job. The move was legally challenged by two trade unions. 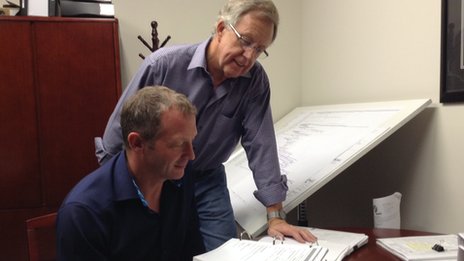 Although a federal judge ruled in favour of the firm in August, the Canadian government has since moved to take steps to protect Canadian jobs.

As a result, the hiring process for overseas staff now takes three to four months per person, compared with three to six weeks prior to the HD Mining case and other similar controversies, says Julie Sullivan, human resources manager at Tarpon.

Ms Sullivan would like to see the government move to a “trusted employer” system, where companies that have passed audits and established a shortage of Canadian workers can go back to the fast-track approval system.

“It’s not cheap,” says Mr Brooke, pointing out that it costs the company 275 Canadian dollars ($261; £161) to process each new overseas recruit, including individual applications to the Canadian government for each person.

Yet skilled staff shortages are only expected to get worse in the next few years, with significant new oil and gas and infrastructure projects on the books for not just Alberta but neighbouring British Columbia.

It all makes for an employees’ market, as Adrian Wallace discovered after leaving the Republic of Ireland because he couldn’t find work back home.

When his original Canadian employer Con-Forte went belly-up just months after recruiting him and 40 other Irish workers, several companies were fighting over the men.

“There were about seven or eight employers that approached us, that wanted to take us all on,” says the young carpenter.

Mr Wallace is now off to Fort McMurray – Alberta’s northern oil hub – having settled on a large construction company that offered higher wages and free flights, accommodation and food, on a fly-in, fly-out rotation out of Calgary.

“It’s unfortunate what happened to us [but] it doesn’t happen regularly. Canada’s a great country and such a rich part of the world.