Ukraine’s first post-independence president has warned the country is on the “brink of civil war”. Leonid Kravchuk, president from 1991 to 1994, urged parliament to “act with the greatest responsibility” as it began a debate on an amnesty for detained protesters.

But protesters want him to resign.

The protests began in November after Mr Yanukovych reversed a decision to sign a long-awaited trade deal with the EU in favour of stronger ties with Russia.

At least five people have been killed and a number of government buildings across the country have been occupied. Hundreds of people remain on the streets of the capital, Kiev. 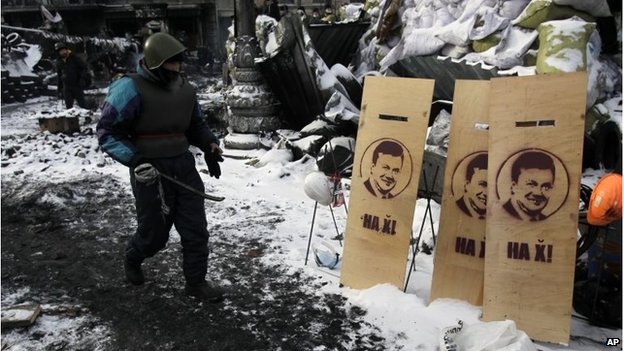 A policeman was shot dead in Kiev on Wednesday, said officials. It was not immediately clear whether the shooting was related to the protests.

Mr Kravchuk told MPs that “all the world acknowledges and Ukraine acknowledges that the state is on the brink of civil war”.

“It is a revolution. It is a dramatic situation in which we must act with the greatest responsibility,” he said in an emotional address that earned him a standing ovation.

Former presidents Leonid Kuchma and Viktor Yushchenko were also present, underlining the importance of the session.

Parliament is considering an amnesty for the scores of protesters detained since demonstrations began, in the hope of calming the unrest.

As they adjourned, speaker Volodymyr Rybak admitted there were “several unresolved issues” but said discussions between the two sides would continue.

The amnesty bill requires protesters to leave their main protest camp in central Independence Square [Maidan], but opposition leader Arseniy Yatsenyuk said this was “unacceptable for us”.

A number of activists who had been occupying an agriculture ministry building abandoned the property on Wednesday, after apparent pressure from moderate protesters.

The protesters won significant concessions on Tuesday as MPs voted overwhelmingly to repeal a controversial two-week old anti-protest law, which had banned the wearing of helmets by protesters and the blockading of public buildings.

The law had fuelled major protests around the country and deadly clashes with the police.

Mr Yanukovych also accepted the resignation of his Prime Minister Mykola Azarov. He has been replaced on an interim basis by his deputy, Serhiy Arbuzov.

The cabinet resigned with him, but can remain in post for 60 days until a new government is formed.

Both US President Barack Obama and German Chancellor Angela Merkel have underlined their support for the demonstrators.

Mrs Merkel told Germany’s parliament the demonstrators were “fighting for the same values that also guide us, the European Union, and that is why they need to be listened to”.

Mr Obama, in his State of the Union address, said that “all people have the right to express themselves freely and peacefully, and have a say in their country’s future”.

The White House on Tuesday said Vice-President Joe Biden had spoken by telephone to President Yanukovych and praised the “progress made”.

Meanwhile, both the European Union’s High Representative for Foreign Affairs, Catherine Ashton, and Enlargement Commissioner Stefan Fuele have arrived in Kiev for talks with the leadership.

Russia’s President Vladimir Putin on Tuesday criticised what he called foreign “interference”, saying its Ukrainians were “capable of solving this on their own”.

Protests have spread in recent days across Ukraine – even to President Yanukovych’s stronghold in the east – and official buildings in several cities have been occupied.

Mr Yanukovych was democratically elected in 2010 and appeared to be steering the former Soviet state towards EU integration until he rejected the planned EU trade deal just days before it was due to be signed last November.

His decision to favour instead a $15bn (£9bn) bailout from Russia to bolster the ailing public finances angered many EU supporters in Ukraine.

Are you in Ukraine? What are your hopes for a political solution? Should there be an amnesty? Send us your comments and experiences using the form below. Source: BBC