Greece’s affair with the euro began with the grandest of hopes. The country approved the euro in 2001, in time to be among the first countries to use the new currency.

At first, the most ambitious attempt ever to create a new multinational currency all seemed to go so well. The predicted problems with banks and vending machines never materialized. The euro surpassed the dollar in value. The launch was hailed as a success.

And yet for Greece, it seems now to have all fallen flat. How did it happen?

To join, a country had to demonstrate that it had achieved “economic convergence” with the other eurozone members — a requirement meant to ensure that different countries would not jeopardize the common currency.

When Greece was accepted, Finance Minister Yannos Papantoniou described it as a day that would place Greece firmly at the heart of Europe.

But even then, warnings were sounded. The president of the European Central Bank, Wim Duisenberg, warned that Greece had much to do in terms of improving its economy and controlling inflation.

But bogus figures hid the true extent of its deficit 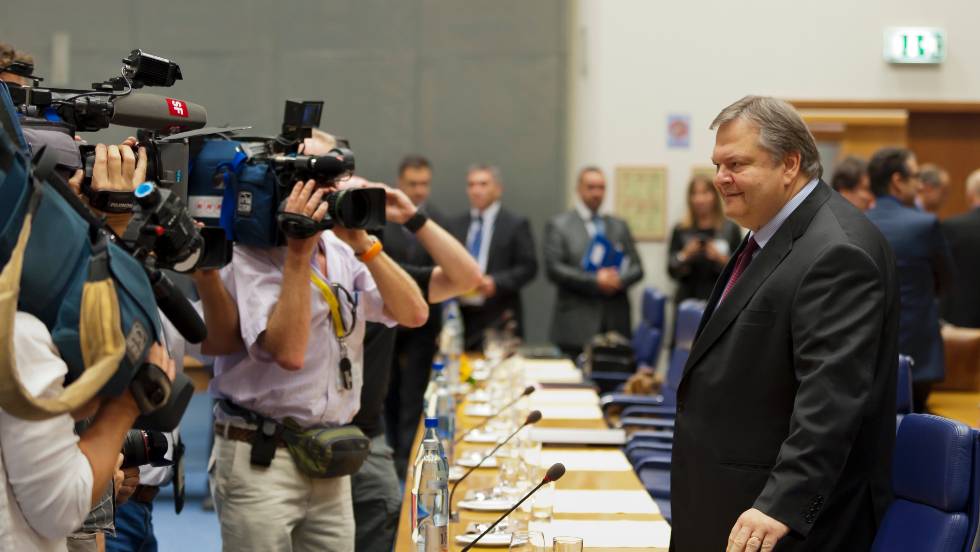 Greek Finance Minister Evangelos Venizelos arrives for a Eurogroup council meeting in October 2011 after announcing his country would miss its deficit targets. Greece joined the euro currency in 2001 on the basis of faulty deficit figures.

2002: Everyone now agrees that Greece cooked its books.

One of the economic convergence requirements was that a country not have a budget deficit of more than 3% of GDP, or gross domestic product.

It was a requirement imposed on all countries, but one that has not been followed over the years by all eurozone countries — not even that staunch advocate of strict discipline, Germany itself.

Yet the extent to which Greece hid its economic problems from its fellow eurozone members would prove staggering.

March 2004: In March, the center-right government of Prime Minister Konstantinos Karamanlis took power. And it took a look at the books.

What it discovered was appalling. The budget deficit was not 1.5%, as reported, but 8.3% — five and a half times higher than thought.

The Karamanlis government faced a dilemma: What should it do with this shocking information?

But as the Olympics approached, it concealed figures. 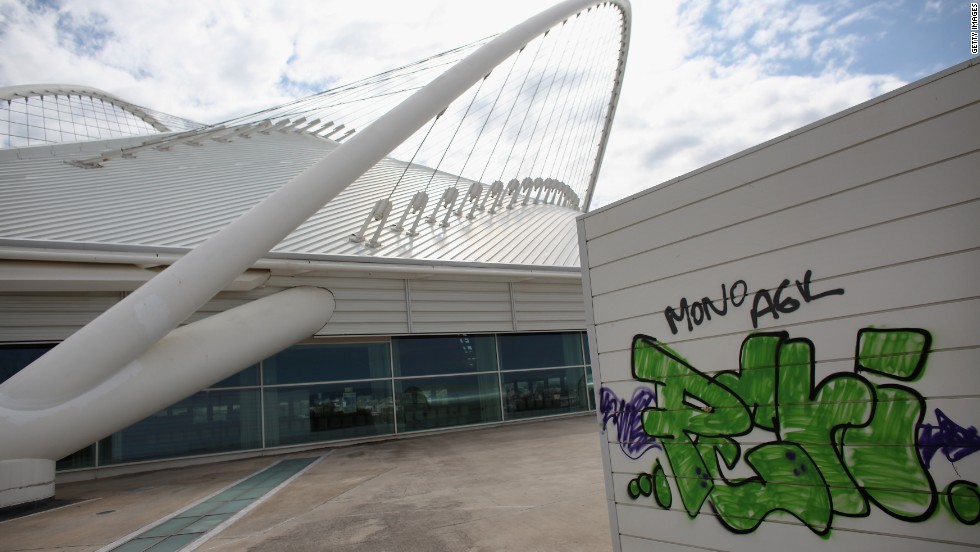 Graffiti marred the velodrome building in the 2004 Olympic Games Complex in February 2012 in Athens, Greece. What was once viewed as a triumph for Greece is seen as having played a role in the country’s economic nosedive.

August 2004: The Olympic Games were approaching — returning to Greece, the land of their birth. This was the country’s turn to shine on the international stage.

Well, no need to upset people, inside Greece or out, the government thought.

Instead of revealing the extent of the deficit — and starting to deal with it — the government covered it up.

From there, it spread around the world.

And it hit countries around the globe to varying extents. Other European Union countries were severely affected — notably Spain and Ireland, although others suffered as well.

And Greece was hit far harder than many other countries.

2008: But few countries were less prepared to deal with an economic downturn than Greece. With a yawning gap between revenues and expenditures, it was vulnerable.

In 2008, the country’s tax collection, such as it was, collapsed. The hole in the budget grew too big to hide. 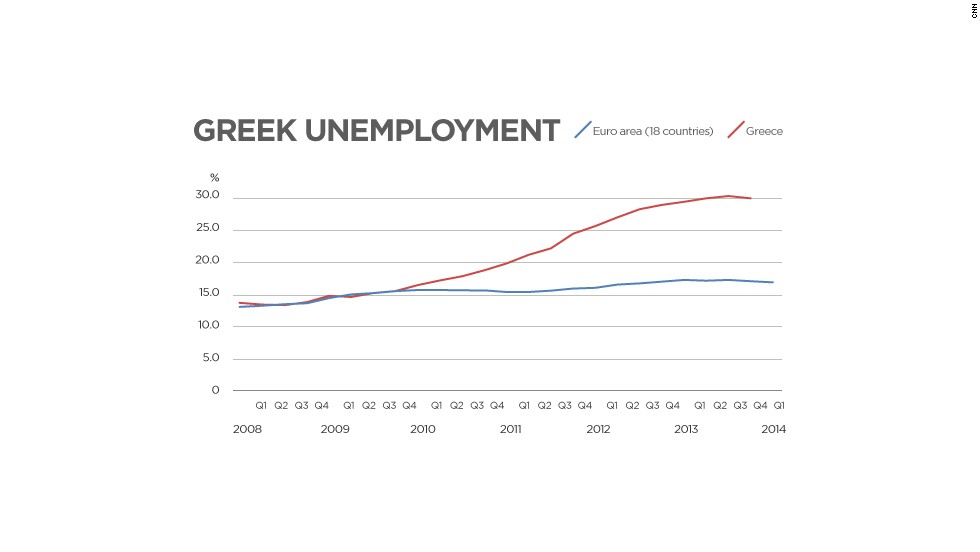 2010: In 2009, international investors, understandably spooked by the revelation that Greece’s previously announced debt and deficit figures were inaccurate, became worried about the country’s ability to pay its debts.

The country’s credit rating was downgraded, first by Fitch and then by Moody’s.

With investor confidence disappearing, the country’s cost of borrowing spiked and the situation ran the risk of running out of control.

So the other eurozone countries, in the form of the so-called troika — the European Commission, the European Central Bank and the International Monetary Fund — stepped in to prop up the patient. 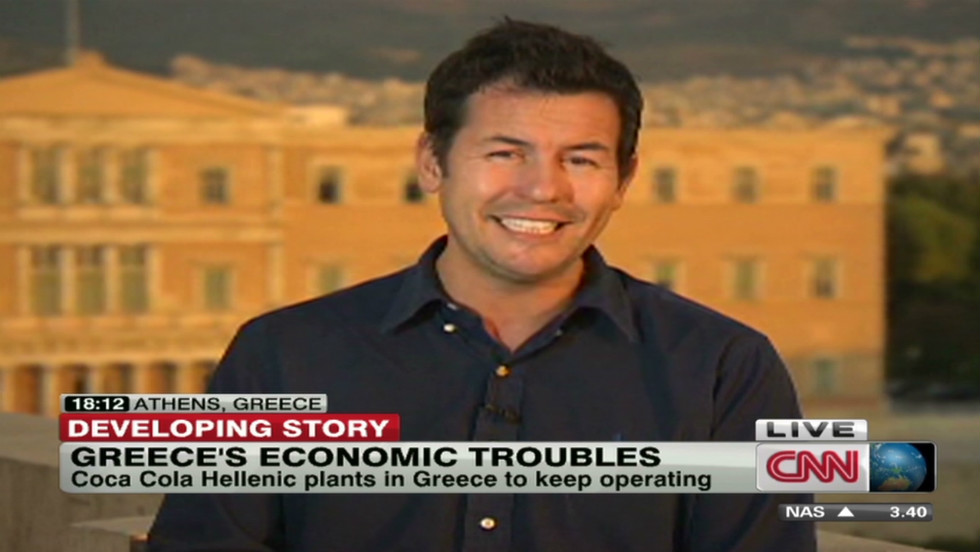 2010: In May 2010, leaders of the eurozone and the Greek government agreed on the conditions for a 110 billion-euro bailout loan. But the bailout came with strict conditions — among them that the government had to improve its tax collection and save money in an effort to bring its budget into balance.

Saving government money, though, meant laying off government workers. And that meant that those workers had less to spend, so other businesses suffered and laid of workers, too.

2010-2012 Protests grew. The country tossed out the government of social democratic Prime Minister George Papandreou and ran through two provisional Prime Ministers — all in 2011 — before turning to the conservative party of Antonis Samaras.

But still, the bailout medicine didn’t do the trick. In February 2012, the government accepted another bailout loan, bringing the total borrowed to 246 billion euros. A new austerity plan was agreed upon as well.

The amount owed to the international lenders was now 135% of the country’s GDP.

And things were just getting worse.

But the country ran out of money again

More money was needed — and realistically, debt relief as well, if the country were ever again to stand on its own two feet.

The country was now led by the left-wing government of Alexis Tsipras. Relations between representatives of the international lenders and Tsipras and his finance minister, Yanis Varoufakis, were poor — hampering negotiations.

In June, the negotiations broke off, with each side apparently daring the other to be the cause of a Greek exit from the eurozone.

That led to the current crisis

At the end of June, Greece defaulted on a repayment to the International Monetary Fund.

The banks started to run out of money. Capital controls were introduced, limiting the amount of money people could withdraw each day.

And now, after weeks of brinksmanship, including the rupture of negotiations and the holding of a referendum — in which the Greek people apparently voted “No” to more austerity — a deal to lend the country more money and cancel some of its past debt is needed soon to avoid having the country fall out of the euro.

That would have unknown repercussions — for Greece, the eurozone and the global economy.

Varoufakis has resigned, saying he was an impediment to negotiations.

Both Greece and its creditors have pledged to renew talks, as they have so many times before. Source: CNN