Bad week for oil and iron gets worse, spurs some risk contagion. Within minutes of U.S. crude-oil futures tumbling through $45 a barrel, signs of a broader risk-off swing started to emerge in markets, exacerbating what was already brewing as a worrying week for commodities.

Oil’s retreat to a level not seen since OPEC forged its landmark agreement to cut output last November stoked declines from iron ore to industrial metals and losses that many commentators had been putting down to individual supply and demand factors. The deterioration in sentiment carried through to the currency market, where the key risk barometer in Asia — the yen — spiked higher against the dollar. And Stock losses from Australia to Hong Kong gathered pace. Bright spots remained, though, with some emerging equities still up.

Crude’s Friday slide extended the previous session’s 4.8-percent rout, with the tug-of-war between the U.S. and the Organization of Petroleum Exporting Countries over global supply levels rattling traders.

“With all the shale producers coming online in the States, it’s very much taking the wind out of the sails of the uptick we got from the OPEC agreement,” said Dr. Theodore, which oversees about A$10 billion ($7.4 billion). “Also iron ore is having a decent move to the downside — it just seems like there’s nowhere really to hide.” 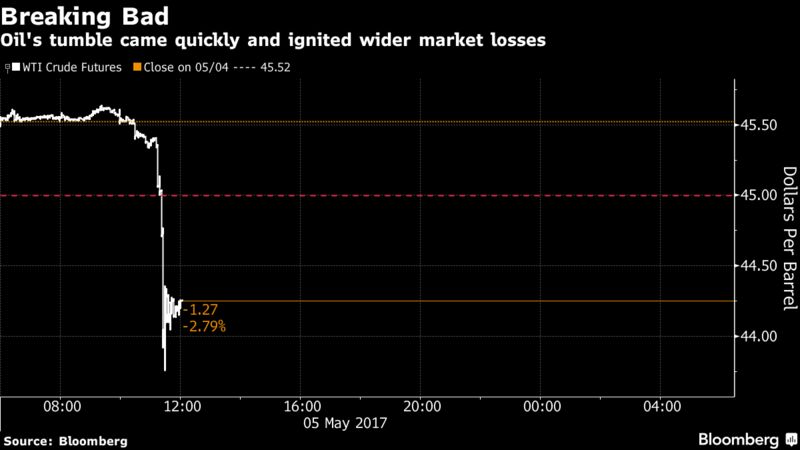 Iron ore has lost about 12 percent this week in Singapore, the most since November, as the material used in steelmaking fails to shake concerns about supply and the outlook for Chinese demand. Other raw materials followed suit, with base metals down across the board after opening mixed in London. The Bloomberg Commodity Index — which affords oil a 13 percent weighting — extended losses into a fourth day.

Traders flocked to the yen as oil-linked currencies like the Norwegian krone and Malaysian ringgit weakened along with the commodity. The move trimmed the dollar’s third straight weekly advance versus Japan’s currency to 0.6 percent and made the yen Asia’s top performer on Friday.

Australian bonds also saw some interest, with 10-year government debt yields paring a climb of as much as 4 basis points to rise just 1 as of 3:20 p.m. in Sydney. Gold — to some, the ultimate safe investment — was initially unmoved by oil’s slide, before rallying as much as 0.5 percent.

While equities in the Asian region were already falling before WTI’s break of $45 a barrel, losses intensified as sentiment soured, with energy and materials producers driving the retreat. The steepest declines were in Hong Kong, where the commodity slump fused with persistent concerns over a regulatory crackdown in China.S&P 500 Index futures also lost ground, suggesting U.S. markets may pay more attention to oil’s moves than they did on Thursday.

Some Asian markets were insulated from the wider retreat, with stocks in the Philippines climbing to an eight-month high on signs lawmakers there will pass a new tax bill. Indonesia’s benchmark was also resilient, rising 0.2 percent in a second day of gains. Markets in Japan and South Korea were closed Friday for holidays.

“I’d be a little bit apprehensive at the moment, certainly, putting on new positions,” Audiss said. But “any type of movement we get to the downside will probably be short-lived and not super exacerbated in equities.”