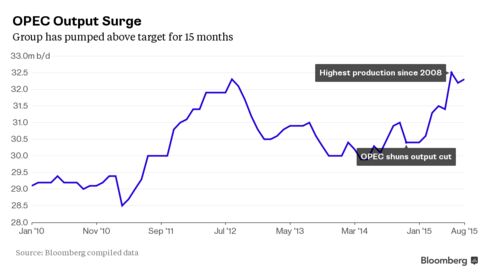 The global surplus of oil is even bigger than Goldman Sachs Group Inc. thought and that could drive prices as low as $20 a barrel.

While it’s not the base-case scenario, a failure to reduce production fast enough may require prices near that level to clear the oversupply, Goldman said in a report e-mailed Friday while cutting its Brent and WTI crude forecasts through 2016. The International Energy Agency predicted that crude stockpiles will diminish in the second half of next year as supply outside OPEC declines by the most since 1992.

“The oil market is even more oversupplied than we had expected and we now forecast this surplus to persist in 2016,” Goldman analysts including Damien Courvalin wrote in the report. “We continue to view U.S. shale as the likely near-term source of supply adjustment.”

Goldman trimmed its 2016 estimate for West Texas Intermediate to $45 a barrel from a May projection of $57 on the expectation that OPEC production growth, resilient supply from outside the group and slowing demand expansion will prolong the the glut. The bank also reduced its 2016 Brent crude prediction to $49.50 a barrel from $62.

WTI for October delivery fell as much as $1.16, or 2.5 percent, to $44.76 a barrel on the New York Mercantile Exchange and is heading for a weekly decline of 2.2 percent. Prices are down 15 percent this year.

“We now believe the market requires non-OPEC production to shift from our prior expectation of modest growth to large declines in 2016,” Goldman said. “The uncertainty on how and where that adjustment will take place has increased.”

The Paris-based IEA forecast Friday that production outside the Organization of Petroleum Exporting Countries will fall by 500,000 barrels a day to 57.7 million in 2016. Shale oil production in the U.S. will drop by 385,000 barrels a day next year as a crude price below $50 a barrel “slams brakes” on years of growth, the agency said in its monthly market report.

The U.S. pumped 9.14 million barrels a day of oil last week, according to data from the Energy Information Administration. While the EIA this week cut its 2015 output forecast for the nation by 1.5 percent to 9.22 million barrels a day, production this year is still projected to be the highest since 1972. U.S. crude stockpiles remain about 100 million barrels above the five-year seasonal average.

Saudi Arabia, Iraq and Iran will drive supply growth from OPEC, Goldman said. The group, which supplies about 40 percent of the world’s crude, has produced above its 30-million-barrel-a-day quota for the past 15 months.

Iranian Oil Minister Bijan Namdar Zanganeh has vowed to increase output by 1 million barrels a day once sanctions are removed as the nation seeks to regain market share. Source: Bloomberg