It’s no secret that crowded airports can be a hassle and a giant time-suck for cross-country travelers. Soon, a workaround may be available for corporations and the ultra-rich.

The concept is this: You don’t need an airport if you can land and take off from your own front yard.

Get ready for a burgeoning breed of commercial aircraft. They hover like helicopters and fly fast and high like jets.

These vertical take off and landing planes — VTOLs — could pick up passengers at their homes or hotels, and fly them more than a thousand miles, directly to a private compound or the roof of a skyscraper.

It’s not totally new. Military planes have been taking off and landing vertically for decades. But so far, commercial flight has lagged behind.

Now, the industry is poised to enter a new era of hovering, commercial airplanes, says Jeffrey Pino, vice chairman at Denver-based XTI Aircraft. “VTOL, true point-to-point travel, has got to be inevitable.”

No prototype exists yet, but XTI’s slick animation shows this airplane cutting a breathtaking silhouette, with sweeping lines, a shark-fin tail and a low-sitting profile.

Imagine these futuristic flying machines landing on a midtown helipad or on the lawn of a CEO’s estate.

They look like space ships right out of the upcoming “Star Wars” movie. Except instead of Chewy and Princess Leia on board, it’ll be a high-flying corporate big-wig.

It’s all about the tilt

Tilting engines allow these aircraft to do what they do. The engines tilt themselves vertically so the planes can hover, land and take off like helicopters.

Then, in midair, the engines shift their direction horizontally, moving the aircraft forward like a traditional plane.

Why not just use helicopters? Because generally planes can fly farther without refueling.

What sets the TriFan apart are three “ducted fan” engines, which Pino says will allow the plane to fly higher and faster than other types of commercial VTOLs.

-Capacity: five passengers, plus a pilot

VTOLs are only now entering the commercial world, Pino says, thanks to newer technologies, including lightweight construction materials, electronic control systems and engines that are smaller, more powerful and efficient. 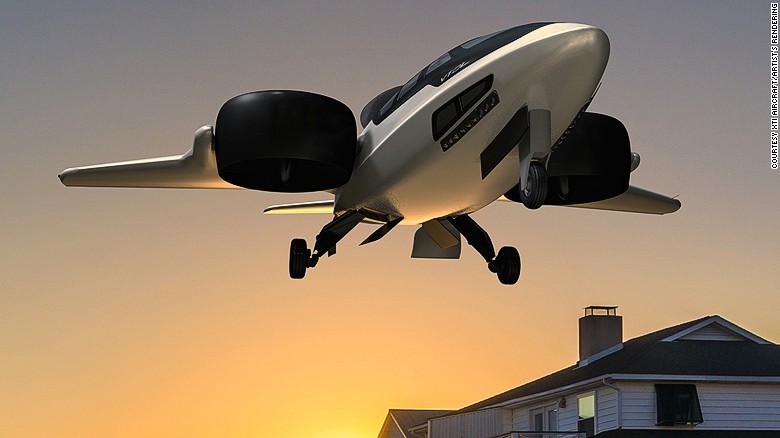 This artist rendering of a TriFan 600 envisions it hovering near a house.

This is really happening

In case you were wondering if these machines are some kind of pipe dream, be advised: This is real. It’s actually happening.

It could be certified by the U.S. Federal Aviation Administration as soon as 2017. Plans call for the AW609 to be manufactured in Philadelphia.

Its engines are different from the TriFan. They’re called “tiltrotor.”

Each wing has a helicopter-like rotor on it. The plane’s maximum cruise speed is about 100 mph slower than the TriFan and its maximum altitude is 5,000 feet lower, according to the AgustaWestland brochure.

The Hexplane flies with six movable propellers that allow it to hover or fly forward. No prototype has yet been built, because, like many aviation firms Oliver VTOL developed its aircraft design using computer simulators.

“You don’t have to go out and build the aircraft any longer to demonstrate that it works,” Oliver says. “You can do a tremendous amount of development with a simulator, avoiding spending a lot of money and shortening the development cycle.”

How safe are VTOL airplanes? Obviously, the FAA’s certification process is aimed at making sure new types of planes are safe.

A handful of U.S. Military VTOL V-22 Ospreys have crashed since the 1990s, but the Pentagon stands by the Osprey’s safety record. 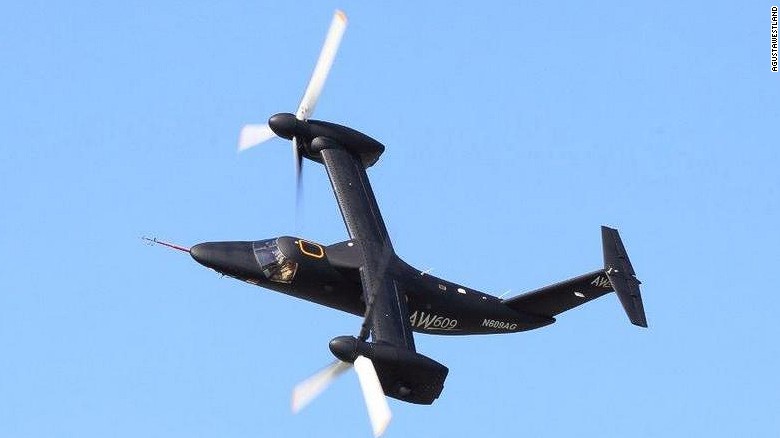 AgustaWestland’s AW609 VTOL airplane could get FAA certification as soon as 2017.

Can these planes legally land in my backyard?

Obviously, like chopper pilots, fliers of these VTOLs won’t be able to land anywhere they want. The FAA will have its say.

Even now, when good helicopter pilots fly to unfamiliar, non-airport locations, they’ve already done their homework to make sure their touchdown destinations are legal.

Commercial VTOL pilots likely will be no different, whether they’re landing on top of a skyscraper, in an empty neighborhood playing field or on a sprawling estate.

Best-case scenario, the TriFan 600 will hit the market in about seven or eight years with a retail price tag of around “$10-ish” million, says Pino.

He hopes to get the attention of investors who might invest in a prototype.

In fact, XTI raised some industry eyebrows when it announced this month it was partnering withstartengine.com as part of a longterm fundraising strategy.

XTI says it can’t accept any money via startengine, and it says it will return any money sent. However, signing up on the website acts as a non-binding expression of interest. Pino says the strategy may be an industry first.

“My sense that under these rules that everyday people can truly invest in a product like ours, we are the first original equipment manufacturer to launch through crowdfunding,” Pino says.

The AW609 could be certified and flying even sooner.

If the trend continues, high-powered execs will have a cool new way to save time and trouble. And real-life skylines could look a lot more like scenes from a sci-fi movie. So, for all you door-to-door cross-country fliers of the future: may the tilt be with you. CNN