Towns and villages in central Italy have been hit by an earthquake for the fourth time in three months. The 6.6-magnitude quake – Italy’s strongest in decades – struck close to the region where nearly 300 people were killed by a quake in August. This time no-one appears to have died, but about 20 people were injured.

The medieval basilica of St Benedict in Norcia, the town closest to the epicentre, was among buildings destroyed. An evacuation of buildings in the region deemed vulnerable to seismic activity last week, following strong aftershocks from August’s quake, may have saved lives. Tremors from this latest earthquake were felt in the capital Rome, where the Metro system was shut down, and as far away as Venice in the north.

The head of the national civil protection agency, Fabrizio Curcio, said there had been extensive damage to many historic buildings but no deaths had been registered. “About 20 people are injured. As far as people are concerned, the situation is positive, but many buildings are in a critical state in historic centres and there are problems with electricity and water supplies,” he added.

Prime Minister Matteo Renzi has promised that everything will be rebuilt, saying resources will be found. “We are going through a really tough period,” he said. “We must not allow the profound pain, fatigue and stress that we have now to turn into resignation.” We have now seen three magnitude-6 tremors in Italy’s Apennines region in just three months.

The big picture is reasonably well understood. Wider tectonic forces in the Earth’s crust have led to the Apennines being pulled apart at a rate of roughly 3mm per year – about a 10th of the speed at which your fingernails grow. But this stress is then spread across a multitude of different faults that cut through the mountains. And this network is fiendishly complicated.

It does now look as though August’s event broke two neighbouring faults, starting on one known as the Laga and then jumping across to one called the Vettore. The mid-week tremors appear to have further broken the northern end of the Vettore. But both in August and mid-week, it seems only the top portions of the faults have gone, and the big question is whether the deeper segments have now failed in the latest event. The US Geological Survey said the epicentre of the quake was 68km south-east of the regional centre of Perugia and close to the small town of Norcia, which is believed to be the birthplace of St Benedict.

Images from the town show the almost complete destruction of the medieval basilica erected in St Benedict’s name, with just its facade left standing.

“It was like a bomb went off,” said the town’s deputy mayor, Pierluigi Altavilla.

“We are starting to despair. There are too many quakes now, we can’t bear it anymore.”

The earthquakes have left the residents of Norcia anxious and shattered. Stefano and his family have slept in a camper van since the first quake in August – they decided it was too dangerous to sleep indoors. He’s now looking to get his family out of here. In the hour after I arrived, there were two sizeable aftershocks – which sent bits of masonry from the town’s ancient walls to the ground. The aftershocks added to the tension felt by residents here.

An emergency HQ has been set up in a car park. Civil protection officials are assessing the damage. Next to a petrol station, there is a group of people with their bags packed, ready to leave. They don’t want to wait for another quake to hit. 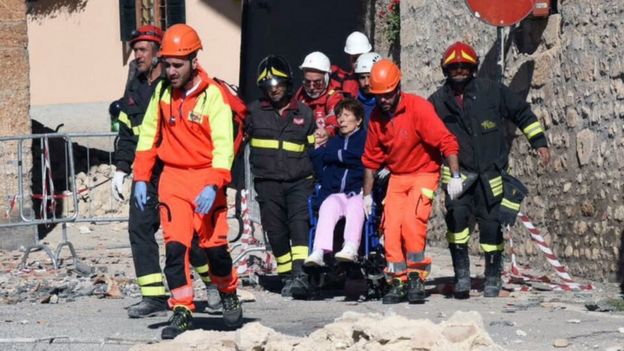 Giuseppe Pezzanesi, mayor of Tolentino in the neighbouring Marche region, said the small town had “suffered our blackest day yet”.

“The damage is irreparable. There are thousands of people in the streets, terrified, crying. Let’s hope that is an end to it, the people are on their knees psychologically.”

The towns of Castelsantangelo and Preci have also suffered considerable damage, but were mainly abandoned after last week’s quakes, of magnitude 5.5 and 6.1. Castelsantangelo’s mayor, quoted by La Stampa newspaper, said there were no casualties at all in the town as “everyone had already left”. The mayors of the villages of Ussita and Arquata said many buildings had collapsed there too.