The world’s biggest energy companies are ready for big projects again. They just need to be cheaper this time around. Energy companies will approve spending for about 30 major projects this year, consultancy Wood Mackenzie Ltd. said in an April 5 report. That’s in line with the 32 that were sanctioned last year and more than were approved in 2015 and 2016 combined, when oil prices bottomed out amid a global price crash.

Projects launched this year are expected to cost about $2.2 billion each, down from $2.7 billion last year and as high as $9.3 billion in 2009, according to Wood Mackenzie. The average break-even price for this year’s slate of projects, which target reserves of more than 50 million barrels of oil equivalent, will be about $44 a barrel of oil equivalent, down from $52 last year. 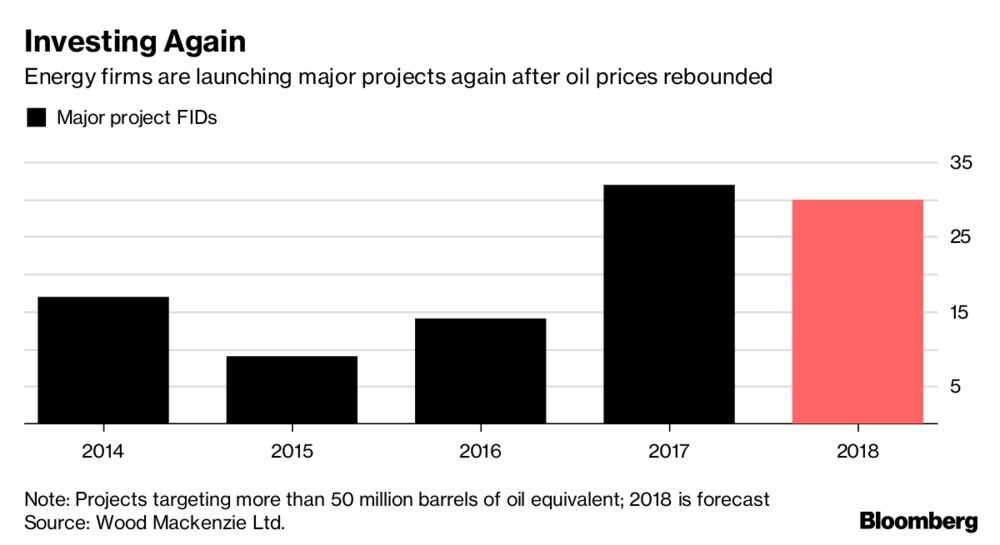 “A couple of years ago, company break-evens were incredibly high, and they’ve worked really hard to reduce spending, reduce workforce and bring down costs,” Angus Rodger, director of Asia-Pacific upstream research at Wood Mackenzie, said by phone from Singapore. “They don’t want to go on massive spending splurge now.”

The shift to small projects could reverse in 2019 with several massive liquefied natural gas projects in places like Qatar, Papua New Guinea and Mozambique nearing investment decisions. If several mega-projects launch simultaneously, companies will have to plan carefully to avoid cost overruns that plagued similar ventures earlier this decade, Rodger said. BP Plc and Statoil ASA have been among the most active in sanctioning new projects during the price downturn, when activity was low and costs could be managed, Rodger said. Exxon Mobil Corp. recently joined their ranks, outlining a plan for aggressive growth in the Permian Basin, Guyana and Papua New Guinea, among other areas.

“Some companies have been more aggressive, trying to take advantage of lower costs, while others are rebuilding their balance sheets,” Rodger said. “All of them are trying to err on the conservative side and keep their shareholders on board.”