Futures rose 5.1 percent this week in New York, settling just below the $50-a-barrel threshold that’s kept the industry in thrall. The increase was buoyed by higher demand forecast from the International Energy Agency and expectations OPEC and its partners will extend output cuts beyond the March expiration date of their deal.

“The narrative in the market is that demand has really picked up,” said John Kilduff, a partner at New York-based hedge Again Capital LLC. “As a result, we’ve gotten this push higher.” 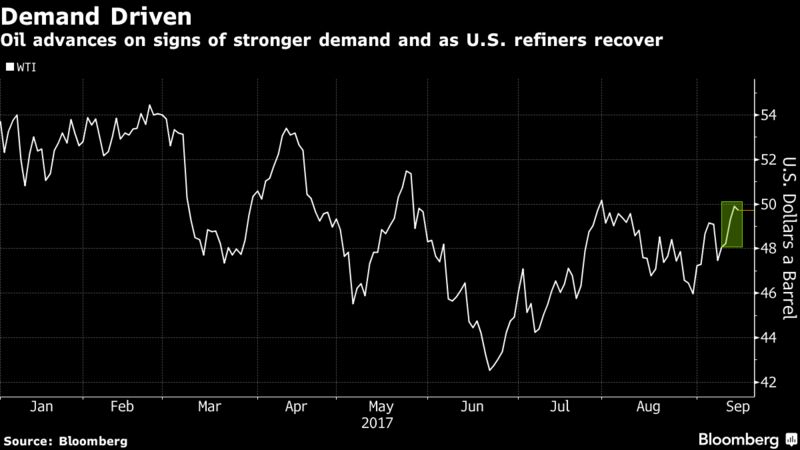 Nearly a quarter of U.S. refining capacity was shuttered in the wake of Harvey. Two weeks later, only three Gulf Coast refineries remain shut, according to the Department of Energy. The rest — including Motiva Enterprises LLC’s Port Arthur refinery, the nation’s largest — are gradually coming back online, helping boost crude demand.

At the same time, the Paris-based IEA said on Wednesday it expects global demand to climb this year by the most since 2015 while the Organization of Petroleum Exporting Countries and its partners were said to be discussing an extension of its deal to cut output beyond its March expiration.

“People are looking for the price to go ahead and settle above $50 a barrel, but they need some more than just the current news,” Michael Lynch, president of Strategic Energy & Economic Research in Winchester, Massachusetts, said by telephone. “We need a couple good inventory reports or perhaps some bearish supply data from Libya or from the U.S. shale patch.”

Brent for November settlement closed 15 cents higher at $55.62 a barrel on the London-based ICE Futures Europe exchange. Prices advanced 3.4 percent this week. The global benchmark crude traded at a premium of $5.18 to November WTI.

“The feel-good factor appears to have returned to the oil market,” said Stephen Brennock, an analyst at PVM Oil Associates Ltd. “Underpinning the prevailing sentiment is the positive afterglow of this week’s frenzy of bullish oil demand forecasts from the leading energy agencies.”

The spread between Brent and WTI will narrow in coming weeks as U.S. refining capacity recovers from the disruption by Hurricane Harvey, according to Fitch’s BMI Research.

Mexico’s drivers may pay more for fuel after a power failure hit a second refinery the same week that the strongest earthquake in more than a century shut the nation’s biggest plant.