Oil traded above $61 a barrel as signs of slowing U.S. drilling added to optimism that the global crude surplus is abating. 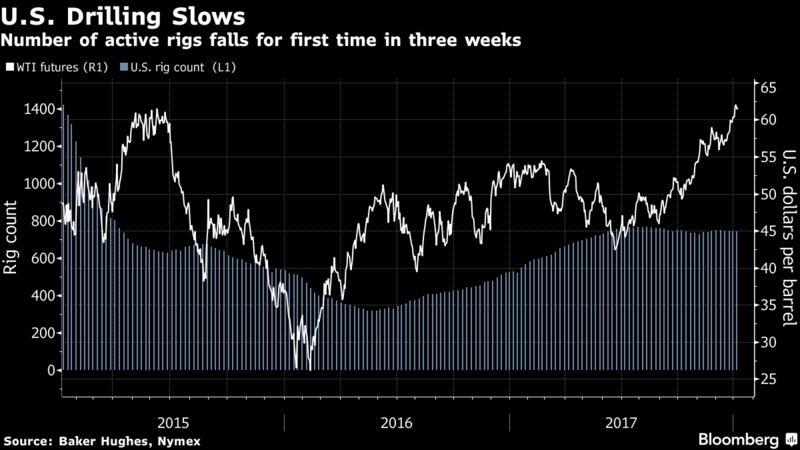 Futures were little changed in New York following a 1.7 percent increase last week. Working rigs drilling for crude fell by five in the seven days ended Jan. 5, bringing the total to 742, according to Baker Hughes data reported Friday, when prices slid 0.9 percent. Meanwhile, hedge funds retreated from the most bullish stance on West Texas Intermediate oil in 10 months during the week ended Jan. 2.

Oil had its strongest opening week for any year since 2013 last week as U.S. stockpiles continued to shrink and amid output curbs by the the Organization of Petroleum Exporting Countries and its allies. The recent strength in crude has spurred speculation that American shale producers may be encouraged to expand drilling to take advantage of rising prices, countering the effect of cuts by OPEC and its partners.

“Softer prices on Friday suggest traders are looking beyond the latest rig count and eyeing the odds that current prices will induce a production response over coming months,” said Ric Spooner, a Sydney-based analyst at CMC Markets. “The WTI price is currently testing chart resistance represented by the May and June 2015 peaks. How the market handles this may set the tone for the near term trend.”

Brent for March settlement added 10 cents, or 0.2 percent, to $67.72 a barrel on the London-based ICE Futures Europe exchange. Front-month prices rose about 1.1 percent last week. The global benchmark crude traded at a premium of $6.20 to March WTI.

U.S. explorers spent the final six weeks of 2017 in a virtual standstill, adding just as many rigs as they laid off. Bowing to heightened investor pressure, drillers are seeking to do more with less in a bid to boost profits. Their money-saving moves include opening already-drilled wells by fracking them rather than deploying more rigs to start new ones.

Money managers cut their WTI net-long position — the difference between bets on a price increase and wagers on a drop — by 3.8 percent to 396,381 futures and options in the week ended Jan. 2, according to data from the U.S. Commodity Futures Trading Commission on Friday. Longs fell by 3.8 percent, and shorts fell 4.3 percent.