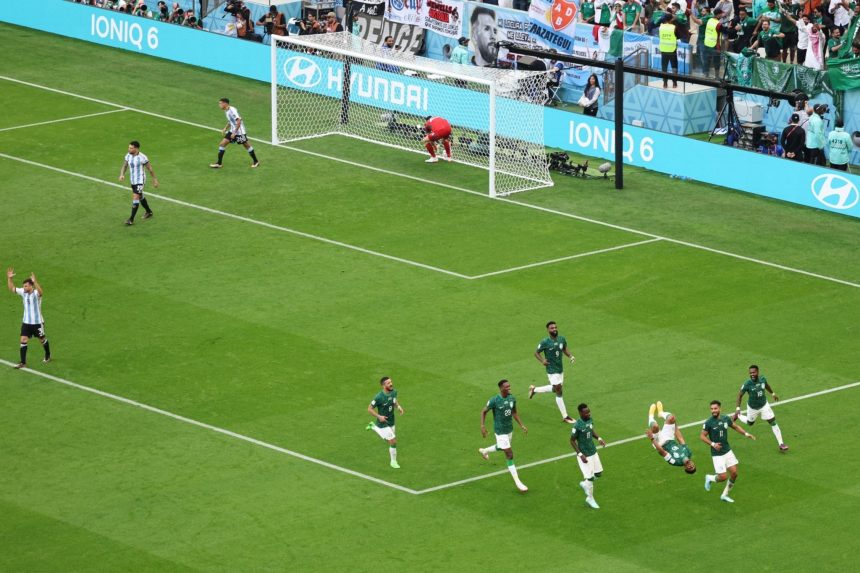 King Salman, Custodian of the Two Holy Mosques has issued directives on Tuesday that Wednesday, November 23, will be a national holiday for all employees in the entire government and private sectors, as well as for students in all phases of education.

This is in line with the recommendation of Crown Prince and Prime Minister Mohammed bin Salman to celebrate the joyous occasion of the stunning victory of the Saudi national team against Argentina in their opening game of FIFA World Cup 2022 Qatar.

Saleh Al Shehri and Salem Al Dawsari scored for the Green Falcons in the second half of the match while the lone goal of Argentina was a penalty scored by Messi.

Saudi Arabia’s Crown Prince and Prime Minister Mohammed bin Salman joined the joyous celebrations of the nation and people of Saudi Arabia in the historic victory of the Saudi national team against Argentina in their opening game of the World Cup 2022 on Tuesday.

A video being circulated on social media showed Prince Mohammed bin Salman embracing those present after the Green Falcons’ stunning victory that shattered a 36-game winning streak for the Argentinian team.

Another video of the Crown Prince waiting for the last moments of the match also showed the decisive victory for the Saudi squad.

Saudi Arabia put in a stunning second-half display and scored twice in a shock to Argentina in one of the biggest upsets in FIFA World Cup history.