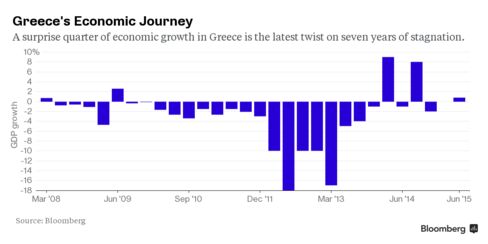 Greece’s economy grew in the second quarter in a surprise surge just before the standoff between the government and its creditors forced officials to impose capital controls.

The Hellenic Statistical Authority in Athens said Thursday gross domestic product rose 0.8 percent, and analysts attributed the growth in part to consumer spending and a strong start to the tourist season. Nominal GDP, which excludes adjustments for price changes, fell 0.7 percent in the period through June.

The data came as a shock after economists in a Bloomberg survey forecast a 0.5 percent contraction. Recent reports painted a picture of an economy crippled by months of bailout haggling and question marks over the nation’s future in the euro. The turmoil forced the government to increase its use of emergency funds for banks and shut its financial system.

“I wouldn’t put too much weight on it as a sign of Greek economic resilience,” said Nick Kounis, an economist at ABN Amro Bank NV in Amsterdam. “One way or another, the economic weakness will come through quite significantly in the numbers.”

The second-quarter data don’t capture the impact of the capital controls, which came into effect at the end of June. A Greek manufacturing index fell to a record low in July, with companies citing a “generally uncertain operating environment.”

David Powell, chief euro-area economist at Bloomberg, said the second-quarter numbers should be taken “with a grain of salt” because there may have been a temporary boost to domestic demand as consumers increased spending in anticipation of the measures.

“It was better to have goods, than euros locked up in a bank,” he said in an interview with Bloomberg Television’s Manus Cranny and Francine Lacqua. “These numbers may be artificially inflated by very high household consumption figures that may not be repeated.”

Eurostat, the EU’s statistics office, will publish second-quarter data for the currency region on Friday, which are forecast to show 0.4% growth. That will follow national reports from France, Germany, Italy and the Netherlands. Spain’s economy grew 1 percent, according to a provisional estimate published on July 30.