She’s the woman who co-discovered HIV in 1983, and won a Nobel Prize for her work. But next month, French scientist Francoise Barre-Sinoussi will retire from her lab.

She spoke with CNN at this week’s International AIDS Society Conference, in Vancouver, about activism, the future of HIV and why there’s still no cure — as well as answering questions submitted by our readers on Twitter.

At the beginning, the epidemic was in San Francisco in the gay community. How have you seen this change over time?

How much does that issue of a resurgence in HIV in certain communities concern you?

I am really concerned and worried about that. We are not speaking as much about HIV/AIDS as we were in the 90s. The populations — including in the developing world — they know there is a treatment. They are less afraid about being infected by HIV and this makes things very difficult. The education and information should be adapted to this evolution. It has not been perfect. The campaigns should take into consideration that it’s a treatment for life, there is a proportion of treatment, after many years, that develop complications, and there are co-morbidities.

The general population is not very well informed about co-morbidities. I saw when I gave a talk to the public, when I start to think about cancer, or aging diseases that appear in patients on long-term ARVs, they say “nobody told us.” They are not fully informed and we have a responsibility.

Why do you think so much stigma and misinformation still exists around HIV?

I guess we are still suffering of the early years of HIV … in the early 80s it was written everywhere in the media that HIV/AIDs was a disease affecting certain populations: in particular the gay population and the intravenous (IV) drug users and that’s really remained in the mind of civil society in general. They still feel somehow that, first of all, it’s a disease that particularly affects those people that are vulnerable but that do not belong to the regular population.

I have that kind of discussion, for example, with taxi drivers when I speak with them. You know, taxi drivers they like to speak, they say “what are you working on?” and after a while I say “I’m working on AIDS” and they say “Oh! You’re working on this disease that are affec

ting those gay people … you better work on other disease like cancer or any other disease that’s affecting us!” (An appalled is expression upon her face). So that means a lot to me.

Even in my own country, in France … I was strongly affected by all the discussion around gay marriage in my country. I thought that after so many years we had made progress in terms of recognition of any population and I was really upset when I saw so much conflict regarding the legislation. Fortunately, it’s over and the legislation has been accepted. But still, not everybody is accepting of those populations. That makes me really mad. Really mad.

With AIDS, the people affected have been very vocal compared to other diseases. How has the activism impacted the way the field has developed?

I think it’s a real partnership. The voice of the activist has been critical for the decrease of the price of drugs, antiretroviral (ARV) treatment, without them probably the prices in terms of access to the treatment would not have been possible.

It’s a reason why I think this collaboration between researchers and activists is critical. For scientists, if you deliver and you have new diagnostic tests, or drugs, or vaccines and those tools are not available for everyone, then you are feeling very frustrated. And it’s not acceptable. I personally believe a scientist has to become an activist somehow.

So are you an activist?

Some of my colleagues sometimes say that I am an activist and that is the best compliment they can make!

How do you feel about the stage we’re at now in HIV science? At the time of your discovery did you think we’d be where we are now?

In the early 80s, personally, I think we were very naive. We were very naive after the discovery of the virus. We said, okay, now that we have found the agent responsible for the disease we will be capable to develop very fast a treatment, a cure; we will be able to develop very rapidly a vaccine and more than 30 years later we still do not have a cure, we still do not have a vaccine.

At that time we did not understand the complexity of the interaction between the virus and the body. It’s really over the years that we started to understand all the complexities, not only of the virus but of this interaction, of the response of the host (patient) to the infection, the role of genetics, the role of immunology. Science has made wonderful progress but we are far from understanding everything.

And how about vaccines?

Even though we do not have a vaccine, I think we have learned a lot from the negative results as well … it’s not a failure. We are learning from negative data as much as we learn from positive data and I think vaccine research is typical of that. In the last six – seven years we are starting to see a lot of progress in the field of HIV vaccine.

But difficult to say today, because we do not have a cure. I am not sure, by the way, we will have a cure. I used to say to develop a cure for HIV is an impossible mission.

What about a “functional cure”?

I prefer to say remission (when the virus is brought down to low levels in the body) … That’s possible. I’m convinced one day — I don’t know when — we will have a strategy to induce durable remission. I don’t believe that we will have only one treatment. It will be a combination of treatments. (But) we need both — a cure and a vaccine. 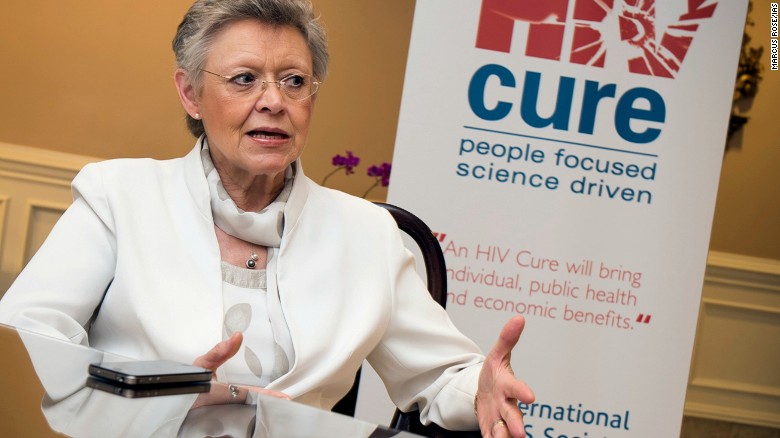 At this conference it was announced that a teenage girl was found to be in long-term remission despite giving up treatment. Should we be excited about that?

I’m not going to say it’s not exciting because the people responsible for that work originate from my lab! So I cannot be objective. But no … it’s interesting data and we are learning from these patients … It’s true the studies on post-treatment controllers, we are learning which kind of response the therapeutic strategies for the future should use. For me, it’s something very critical to make progress in science.

Are you really not optimistic that a cure will be possible?

Even if you have a very efficient strategy, how you can make sure that there’s not one or two cells still there and if one is there the virus will reappear again? That’s why I say it’s an impossible mission.

But you never know.

Are you really retiring this year?

That’s right, in my country it’s mandatory to retire. I already got three additional years. I will officially retire at the end of August. That means first of all my lab will close on 31 August, so I will not have any research activity myself. However, I will probably continue some activities of course at the Pasteur Institute … and I will continue to be involved in international activity for the Pasteur institute.

My agenda is almost full until 2017! I’m part of different committees, boards, scientific councils and I will continue activity for the IAS (International AIDS Society), especially for HIV cure.

Do you ever wonder what your life would be like if you hadn’t discovered HIV?

I guess I will have continued to work in the field of cancer, which I was before. At the end of my career now, we are returning somehow to cancer. Because the cells that are persistently infected are proliferating cells (multiply rapidly like cancer cells) … so the field is coming back to cancer somehow.

So I’m coming back to the early days of my career … at the end. These are excerpts from the full interview with Francoise Barre-Sinoussi (lightly edited for clarity). Source: CNN